Conducting an investigation, whether formal or informal, is essential before any action is taken. Becky explains why. 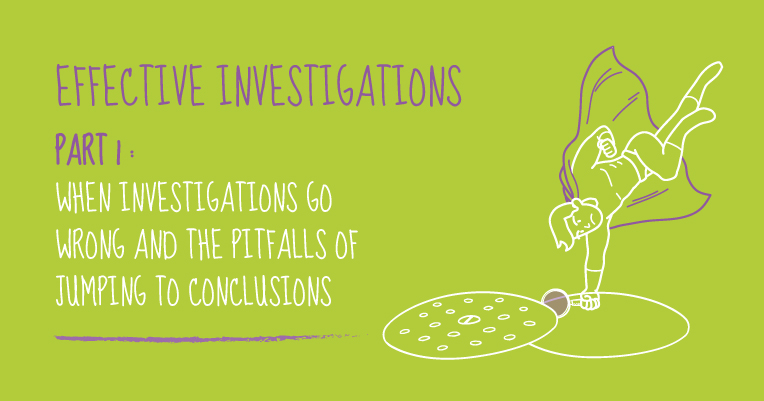 We’ve all been in situations where an incident occurs, and thinking we know what’s happened, we jump in to discipline someone. We know they’ve done it and there’s no point wasting time.

Then the employee appeals the decision…

At the appeal, you discover the facts weren’t as you thought – meaning you need to give a lower level warning or over turn your decision, and end up looking a little silly. Or, even worse, you’ve dismissed someone, and the appeal shows your decision was not reasonable or fair because you hadn’t considered all the facts.

As American lawyer, Ken Starr said: “Whether the story reflects the facts is (obviously) a different matter”.

In employment law terms, it all comes down to whether or not your decision is fair and reasonable (based on BHS v Burchell [1978]) i.e.:

Most disciplinary hearings, appeals and tribunal cases hinge on the quality of the investigation. If you’re making a decision to issue a warning or dismiss an employee based on the information you have in-front of you, you want to be sure you have:

Which means, no matter how quickly you want to act, you need to have conducted as thorough an investigation as possible.

So, what are the pitfalls of not completing a thorough investigation before acting?

You don’t have enough evidence

An obvious one, but if you don’t do some digging and complete a full investigation, you might not have the facts to be able to issue a warning at all.

Your process is flawed

The ACAS code states you should complete an investigation into a situation before you take disciplinary action.  The investigation can be formal or informal, but you still need to do one. The investigation helps you establish the facts and whether or not there has been a breach of your rules, policies and procedures.  It establishes whether there is a case to answer, providing the context within which the employee presents their case at disciplinary.

Acting too quickly or without an investigation could mean:

By taking the time upfront to investigate, you save time with appeals later down the line, where you may need to completely redo the investigation and rehear the disciplinary in order to rectify the mistake and come to a fair decision.

If you don’t investigate fully at first, then you have the additional cost of someone’s time to hear an appeal. However, if you have dismissed, then you could be facing a claim for unfair dismissal or discrimination which you will then need to investigate or defend. This can mean extra tribunal costs, solicitors’ fees and settlement agreements.

Making a bad decision and acting in haste could have implications for your personal reputation. A point to note, if an employee claims discrimination, they can bring a claim against both the company and their manager. If it goes to tribunal, the damage to your company reputation is hard to quantify.

So, what can you do to help avoid these pitfalls? Part 2 of this blog series will look at how to do a thorough investigation and put the above into practice.