HR180’s team of HR professionals are based in Leeds, Yorkshire. At this festive time you may well need us more than you might think!

As the glitter ball of destiny has decreed that Louise, Danny and Ore will be tripping the light fantastic, in what is tipped as the best ever final of Strictly next Saturday, it isn’t surprising that a recent survey discovered that so keen is the nation to add some Strictly Come Dancing sparkle to their party season, 14 per cent of Brits have actually considered taking dance lessons!

The survey, conducted by Mecca Bingo, also found out that dance floor disasters are set to leave millions with that morning after the night before feeling this Christmas party season, with 37 per cent saying that they’ll wake up embarrassed by their moves – and 7 per cent of employees actually avoiding their office bash all together to avoid dancing in public. 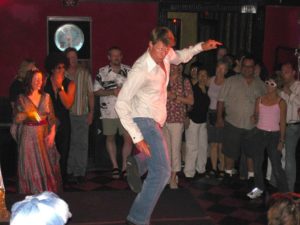 Even the bright young things in the office are not as comfortable on the dancefloor as you might think, with 16-24 year olds the most likely to be mortified by their moves, especially dreading the office Christmas Party Instas posted by their colleagues!

The survey also spotted that unsurprisingly 1/3 of the UK’s workers don’t enjoy the festive fun. Office romances, of course, can play their part in party gaffes – 27 per cent think dancing with someone other than their BH being the reason they wake up with worries about the night before.

Very interestingly (!) 42 per cent of HR professionals will regret dancing with someone they shouldn’t and half will get too merry! (NOTE HR180’s HR professionals were perfectly well behaved at our office bash!!).

And finally…the survey showed that it takes on average five alcoholic tipples to feel confident on the dance floor: at which point the ‘robot’ is the nation’s favourite dance move, with 9 per cent of those surveyed displaying this Peter Crouch-inspired routine and UK dancers are also likely to channel their inner Louise Redknapp or Danny Mac, with 30 per cent attempting to perform Strictly-style moves (perhaps not quite to their standard!)

Should your Christmas do have brought out the slightly less glamourous side of your employees than we might find under the Strictly glitter ball, and you need help in putting everyone’s self-esteem back on an even keel after a rocky night out, we are the people for you.

Should it be that members of staff (or indeed you!) have pulled out some slightly out of character behaviour whilst enjoying the season’s festivities, and it has ruffled some feathers, HR180’s HR superhero team are ready to take your call on 0808 1221 180.