It’s a quiet disaster involving the sacrifice of 35 women that I want to commemorate today – 100 years after the awful events of the Barnbow munitions factory situated not many miles from the HR180 office near Leeds, during the First World War. They were known and the Barnbow Lasses or Barnbow Canaries. 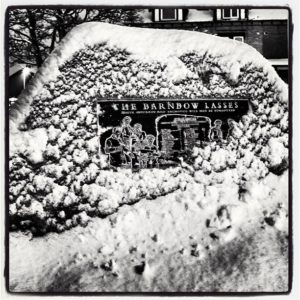 It was just after 10pm on Tuesday 5th December 1916, when several hundred women and girls had just begun their night shift filling, fusing, finishing off and packing 4½ inch shells. An H&S disaster waiting to happen, shells were brought to the room already loaded with high explosive, then the girls inserted the fuse by hand, screwed it down and then it was taken and placed into a machine that revolved the shell and screwed the fuse down tightly.

Sadly this went horribly wrong this very day 100 years ago and in screwing down the shell, it exploded with great force and 35 girls and women were killed and the factory severely damage [read more and see images here].

So why did no one except those directly involved know about this – the largest loss of life in Leeds – until 6 years after the event? Partly it was due to the lock down of news during WW1 – especially sensitive information on where munitions were made – but part of me wonders if it was because in the scheme of the enormous loss of life between 1914-18 and all the other C20th wars it pales into insignificance, and another part wonders if it was because the victims were working class women…

We have come a long way in terms of women’s rights and Health and Safety in the workplace with amazing legislation in the last 100 years to protect personal and working rights.  So whilst there is still the potential for loss of life and injury in the workplace, forwarned is forarmed and incidents such as the one the Barnbow Lasses suffered inform how not to do things today.

Let the centenary of this disaster remind us that as employers, directors, managers and business owners (and that it is a simple human responsibility) we must take care of those who interact with our businesses – including but not limited to our employees – making sure that systems and procedures are fit for purpose AND ensuring they are followed by EVERYBODY.

Not sure your policies are up to scratch? Having issues with emplioyees? Call the HR heroes on 0808 1221 180 for a chat and look at the best solutions for your business as well as a sympathetic ear!