You mean there’s HR on board a Cruise Ship? Opening a ship.

Following Becky Mee’s blog post detailing her experience of ‘closing’ the Celebrity Mercury, (an 1,890 passenger and 850 crew cruise ship) and transferring her to a sister brand, TUI, our HR Partner, Tim Frear, gives us a mirror image – opening a ship – with Reflecting on Reflection! 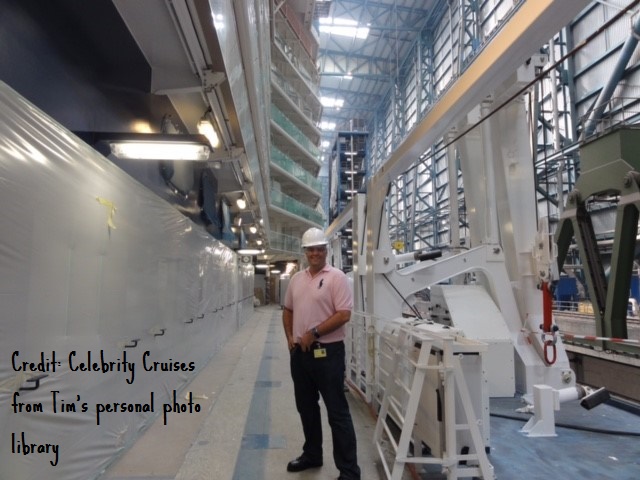 What ‘opening’ a cruise ship taught me about culture, organisation and communication

I had the pleasure of opening Celebrity Cruises’ Celebrity Reflection in 2012 – the largest ship currently in the Celebrity fleet 1047ft with 3046 guests and 1,200 crew. Although never having done a ship opening (or working in a shipyard before) it was a new and exciting challenge for me – though I had been part of an opening team for Holiday Inn Express in Leeds in 1999 so was able to use my project planning experience.

The pre-planning of people management with any ship newbuild is crucial – having the right people in the right places makes all the difference. Celebrity Cruises had an amazing newbuild team who really understood the part they played in the large jigsaw puzzle.

The Miami team’s challenge was to get some of the strongest Celebrity employees from around the fleet to be assigned to the Reflection opening, to make sure the ship launched on time, looking ‘100%’, with all the employees skilled up to run with a new vessel.

With 9 other ships in the water at the time it was important to balance out the talent on all ships, leaving none short. In the end, there was a beautiful blend of existing employees, new hires and promoted employees.

Up to 2,000 employees and contractors needed accommodation prior to the launch which involves making sure partners, friends, husbands and wives are together so berthing management was key. Our ship was the property of Meyer-Werft, and we only received a set number of crew rooms a week. This is equivalent to an experienced Hotel Rooms Divisions Manager juggling with 30 balls whilst their leg is being pulled by a 5-year-old child – I wouldn’t have changed it for the world!

Crew were assigned to Celebrity Reflection well in advance of the opening which gave us time to communicate what would be expected of them via e-mails, Reflection Newsletters and HR Manager hosted meetings on all other celebrity ships.

I cannot stress how important good planning is! Knowing when flights were arriving allowed all crew to be pre-security checked for entry to the shipyard. The robust on-boarding process meant crew were relaxed, aware of what process was being followed.

Crew knew when they would be collecting uniforms and seeing tailors, what training to expect and free time activities – all local amenities being detailed making it easy for all crew to get what they needed.

Just as Becky explained in her blog, companies have their own culture and feel depending on their branding and location. It was our team’s responsibility to create the new culture for the Reflection.

Having stronger leaders in key roles gives strength to employees, who were then able to ask for direction and know they can make mistakes and learn from them without reprisal. This positive culture came from all the leaders being truly interested in the team they had with them, bonds were formed and relationships gained. These follow from ship to ship.

Communication was key – not just the formal prescribed what, how, where and when but the informal chatting, welcoming and taking a real interest in the lives of the staff.

At times, you want to just ask staff to follow plans, do what is needed just until the ship is launched, but with so many people in such a small space conflict is inevitable! Being able to effectively manage employee relations issue with accuracy, speed and efficiency allowed me to not get too snowed under with issues.

We had a blend of new hires and existing employees so we were able to pair them up with a colleague who could buddy and mentor them through the first few months. Our team’s job was then ensure empoyees’ wellbeing such as making sure they could phone and chat with their family, that they were eating correctly and understood what was needed of them, reinforcing the open culture of the Reflection.

We all had a part to play in a larger more complex plan. Understanding your place in the newbuild and that of the leaders around you will keep you grounded. I learnt that “It’s not my job,” doesn’t exist in any newbuild situation and that what is required of you can change in an instant. People are unpredictable so you must be flexible in managing and look for results through the most obscure ways to produce a positive outcome.

‘Reflecting on Reflection’ could be a book, the stories gained through the newbuild process, the amazing people who make opening a ship a true pleasure. There will always be challenges – it’s how we manage these challenges that set us apart from the rest.

(We were inspired by an original article from People Management. Read more here.)